Quite some time ago, I posted a thingy on steganography and how the Internet is not filled with ..x pics but cat pics, for that reason.
More recently, I posted a bit on how traditional crypto and stego (in the form of mimicry and crypsis, see here) are comparably used in adversarial-example AI examples. Not discounting the wider definition of the term, but here, in a narrower sense.

Again, AI may come to the rescue at picking up traditional stego in any format, if somewhat-broadly or -narrow pointed to that qua learning.
It may also be trained to detect any tampering towards adversarial (narrow sense) so such tampering may become less useful ..? Possibly, plausible deniability [oh how great a buzzword to have all but lost its popularity] may come into play; but hey, when the AI overlord system says so, who are you human to derogate it ..!?

Somehow, I feel we aren’t yet on a sufficiently wholesale track with this – though humans cannot detect pixel-wise tampering, they can detect it on a much higher abstraction layer than AI can / will(??). Since evolution has favoured the blurry-yet-Kant’ian sense-making on sum-total (visual [1]) impressions, not bit-wise adversarial anomaly detection; for reasons of economy and speed, one guesses – we’ll have to ask evolution when we meet it which given the speed of AI developments may be quite soon…
Au contraire, AI ‘gets’ pixels but not yet too much of full picture decomposition into ‘real’ objects. The things that Kant saw, but e.g., Buddhism denies. [2]

Now, I’ll leave you to ponder it all, with: 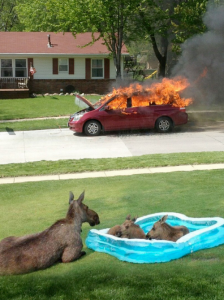 [1] Surprisingly, Kant doesn’t go into other senses all that much, and uses the visual to ‘depict’ [recursive pun accidental but also intended] impressions as if 24/sec. slides.
[2] Both have a problem with Time, though. Kant has a ‘a priori synthetic’ categorisation but makes it fundamental for Vernunft to exist at all (as time is required to make sense of, i.e. decompose, impressions) and still doesn’t define time properly, and assuming such a thing as external reality / ‘objects’ as ‘real’ things out there but ‘space’ not existing. Buddhism does without space or external reality altogether, but has inherently cyclical time and an escape from that ..? Possibly I’m conflating various sub-strands here.