There seems to (have) be(en) something of a crisis of late, or a pandemic or what had we. All of the world was disrupted, either through the course or – much more often – through the countermeasures taken.

Considering that in fact, apart from the industries (still) locked down for various reasons (regardless of the validity), all seem to have coped quite well, this would for the BCM community out there, or in your organization, … quite bad.
Since the overriding argument now is: “Hey even in an all-out global pandemic when we didn’t have anything near the sketchiest sketch of a proper Plan B for this scenario[1], things worked out just fine..! Even some Boaty McBoatface in the Suez Canal was worse.” Good luck using the pandemic as an argument for more budget.

Or …
Have you already figured out how to not let this good crisis go to waste for once?
And even then it’ll still be hard: “Yes, it turned out that a global pandemic we manage easily, but for something one to three scales less big that might in theory hit us only, we’ll need mucho more budget.” – You may be good a BCM, but less so at Sales… I’d advise to pick up ransomware as an argument. Not the cause(s), but the effects that can have many other causes as well. Since you don’t care what the cause might be but want to fight the consequences, right?

Also … anti-fragile:
On a second note, qua BCM: Did you take sufficient notice that over the past couple of years, the trend and hence executive expectation is shifting from ‘mere’ fall-back and struggling on till some distant future restore to the old (sic) ‘normal’, towards actual resilience, robustness, losing not much in Plan B mode, even ending in anti-fragility as defined by Taleb (as being better off by using the crisis as crowbar to change for the better e.g., your business processes or even make strategic turns)?
[You now deserve a short sentence since the last one was way too long]

This will require a Plan B at systems level. Not per element like the old IT-type ‘system’ definition but overall; have a totally different ‘business canvas’ if the old way of working is defective vis-à-vis circumstances. Like restaurants during the last crisis: Some (upper end of market hence quality critical) of them successfully switched to home delivery with only parts of the kitchen processes remaining as they were. Sometimes doing as before or even better, financially. Though they opened up again as soon as they could; they’re in that business of delivering fine dining at their (high-service orientedly staffed and appropriately decorated) place(s), not UberEats. The unsuccessful ones stayed too close to how they did things before, and suffered.
The same, for schools of the upper tiers qua pretension of academic elevation. Some switched to the closest they could remain to classroom (even blackboard) broadcasting, losing many essential educational experiences; e.g., physical closeness – it’s not all about knowledge but much more about social development and physical … education; and a proper (sic) ability to field questions and discuss among many (sic).

Others, the (will show to be) successful ones, evaluated the concept of education and how to deliver it, and rightly concluded that the core is not served by moving onto Zoom or, the horror, Teams, but by integrating non-classroom education in a broader perspective – which will mean devastatingly lower tuition fee levying possibilities but a better all-round educated body of alumni. And quite some efficiencies, serving globally instead of just the previous infinitesimal fraction of the (quality / pre-educated) potential enrolment. With nice tie-ins for highly efficient (for the institution! reasonable income over minimal outlays) graduation sprints.

Your call
What will you focus on: What to do when yesterday’s Problems hit, or do that on the fly when planning for the jumps forward and the repivots (at full-enterprise scale) to be done when under pressure everything becomes fluid..?
Given that grave (by impact) variance in any organisation[2], its uncountably many foreseeable or black swan variables in the environment that all have such second-order variance in magnitudes and frequencies (sometimes in covariance either positive or negative, sometimes not), and too much lapidary heaping of qualifiers is in this sentence already and it’s getting too long, we better improve BCM by … not dreaming up just a enormous number of new scenarios to run through, paper-based, and devise solution sketches for. We’d better do better.

Like, take one step more back, and get the helicopter view over what the business is for. The mission that’s in the vision (as here, not as it is commonly mistaken). Then, you’ll see far better alternatives for the way business has operated so far.
This mode and details of operation may be quite OK so far now it has grown from some past situation to the current one, just like evolution can in organisms (the things that grow out of compounds of ‘organs’ all too similar to your body, unless you’re a bot) grow new solutions but only from the base case that went before and with some resilience (I now realise) from the past optimal organisation. But in case of shock, much more variation may be required. Yes, many more individual organisms/sations may not make the phenotypical transition and go to ashes, to dust.

But if you had prepared yourself for something on this scale – and had taken as cost of doing business / staying in business / cushion, the submaximalisation of profits that were and are the flip side of building reserves and reserve change capacity ..!! – you’ll be the ones to survive, either through survival of the fattest (retained dividends…) or survival of the quickest[3].
So, I’d suggest you start that ‘governance’ level awareness training with all stakeholders to dream about the actual future not just the rosy-case scenarios. Which is fun I can tell you, and may lead to more mature investments, by the attendants too towards their personal finances …

Hey, ‘crisis’ is a neutral term, pointing at a situation which is decisive for some future direction..! Comp. ‘critical condition’ in medicine: could go wrong, could go right, it’s in the balance. Go push for the positive!

And for your viewing pleasure: 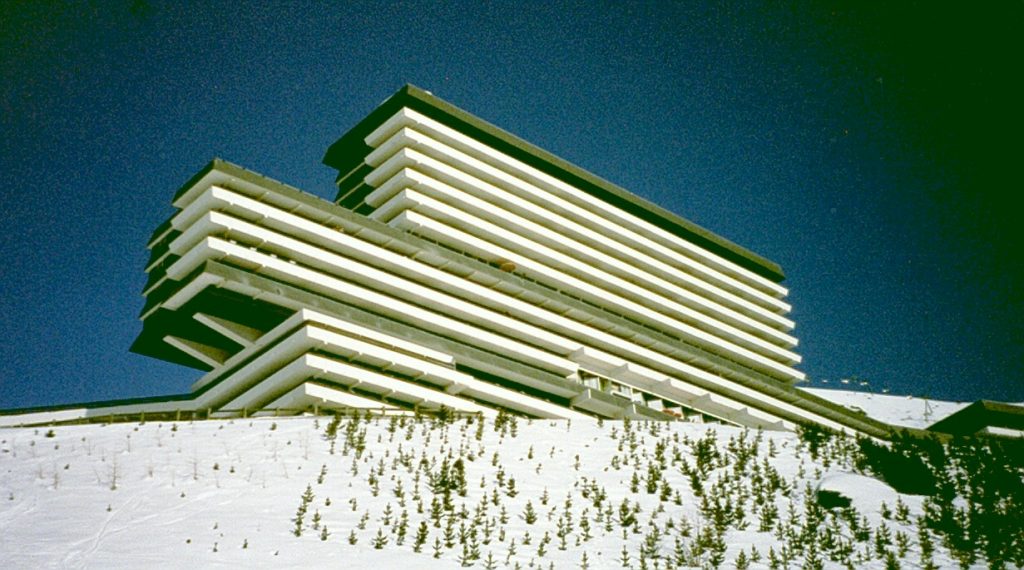 [Dat 70s architecture; Les Menuires]
[1] Excepting those that had something old Avian Flu-like plans buried somewhere in annex Z of their BCPs; probably didn’t think of the massive work-from-home that was pulled off now.
[2] Don’t try to correct me; this is the original UK English we’re talking.
[3] In the sense of ‘the quick and the dead’; quick as in quicksilver’y agile [not Agile which is <Calcified Bureaucracy>^3].