Question: Why don’t we have robot suitcase (un)loaders at airports yet ..?

The physical robot tech is there already, for a number of years, including the touchy-feely right-pressurising of the grippers. And it’s not like there’s a need for sensitively treating eggs or so; today’s manual grippers don’t seem to be all that delicate with your luggage as you can see from the waiting areas or your plane seat.
The piece-by-piece visual ID part also has been solved long ago, and today’s improvements in image processing (think: cars) has more, vastly more than required, subtlety. With a huge margin, even, as all luggage has a somewhat-similar format – or wouldn’t be allowed through luggage self-check-in.

Add in the possibilities of automatic weight balancing (the auto-pick-upper can locate the barco tag, and can decide where in the plane any piece would go); lowering imbalance. And in the memory of this; when some passenger thinks they’re so Important that they can go on shopping till the gate has closed, the Machine will know somewhat-exactly where the luggage to be unloaded sits. Thus lowering wait times, delays.
The Machine would also know exactly which luggage did or did not go in/out of a plane, thus having an extra check on lost/mis-routed luggage. And when some piece goes lost (elsewhere?) a cursory description could run through the visual-recognition system to spot its last-seen location. Both, increasing travellers’ airport satisfaction rating.

Yes, today’s luggage handlers are cheap. But they act like it, unsurprisingly – very low pay with high work-related-injury risk induced stress –, decreasing non-financial returns of airports (i.e., customer satisfaction). And they care not about speed, anyway. Not in the way that a Suity McSuitcasebot would be able to work considerably faster (thus potentially lowering run-around times!) than a human handler that complains, has a sore back (average airport-deployed employee health increase!), doesn’t care about precision (careless negligence) and possibly maltreats luggage (throwing it around and who cares when something accidentally drops).
I also see qualitative improvements in security; less men handling luggage, more per-piece control.

And qua overall handling: For one, linking up the distribution/collection of luggage with the central storage/handling under the airport, may save layover costs (space/time). For another, why not have a continuous distribution system, with holding facilities much closer to every gate..? Increasing turn-around times even further. Also since the self-checked-in luggage under the airport already is in their individual trays, easing robot visuals/handling later on.

So, probably robots would take some investment to develop and deploy. And some handler staff would have to be retained, for on-site supervision and troubleshooting I guess; no categorical redundancies but some, with retained staff having less hauling, slightly more interesting work left. Like outsize luggage or precious cargo for which the high-speed machines can’t field enough tenderness.
Returns are both non-financial and financial. Add the possibility to let robots haul (a bit) heavier luggage – probably, in the plane’s cargo hold humans may need to schlepp still – but one can allow variation, and charge per kg over some (low) standard weight ..? [Pre-registered otherwise the plane might get too heavy for take-off…]
All improvements require upfront investment — for a serious and lasting return in time.

Edited to add: This may be thrown into the mix. Slightly after It’s five o’clock somewhere so you can figure out where, on your own you smartypants. 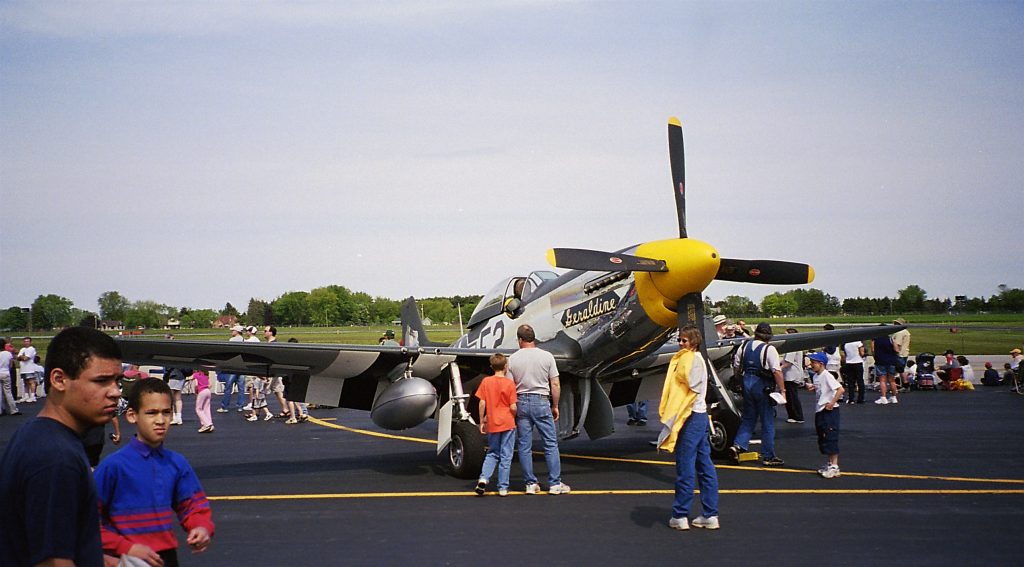 [This one wouldn’t need help with ‘unloading’ I guess; an old analog pic from … near Racine, WI at some inpromptu(ly found) local air show]