When sports are considered to be character-forming for later (mostly assumed to be business-)life, either by having been trained to be competitive or have learned (really?) to cooperate in teams (really?), let’s see which versions there are: 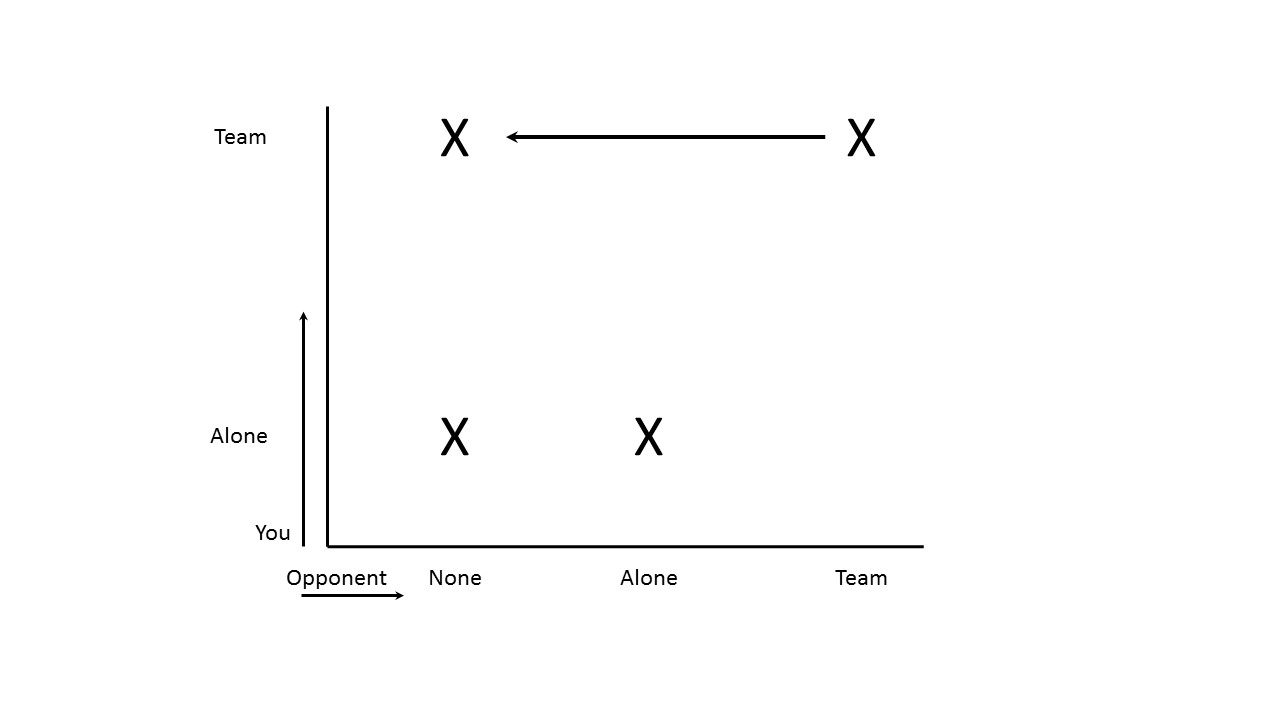 In which the You Against Natural science (No counter-actors other than nature, only personal performance counts, possibly measured against others but still, bad luck gets you), You Against One opponent (where one’s in a knock-out tournament or variant; running into the later champion in the first round doesn’t do much for your chances for second place), and Team Against Team (if you’re a champ in a bad team, fuggeddaboudit; the other way around too, like Leicester City…), are all too well known, with the ‘character formation’ mostly being: Either you win or are a loser, and Suck It Up The Other Guy(‘)s Much Better.

But in business … Be careful not to think that it’s a team-to-team competition. Yes, you may assemble, or join, a team, but you’re playing against … the Market. Not another team … Unless the very unusual situation of a duopoly, which should be breakable, legally.
Rather, you’re up against ‘everything out there’; can count only on one’s own errors, not count on the luck of anything out there working your way though they sometimes do. And the character building/application is … well, mostly about you not being Hercules.

Well, if you think you are the big Heracles himself, note that your Impostor Syndrome is no illusion. The Wonder CEO that thinks he’s in the bottom right corner, is deluded to not see that it’s not all the underlings (certainly the sycophants) in a Team against him (seldomly her), in an internal struggle much larger than any competitive fight out there. But that all those one’s up against, are the Team in the top left corner, though possibly having ousted him for displaying anti-team play morals…

Talking of big business: What sport would have massive teams of hundreds, thousands, hundred thousands of players on either side ..!? With all specialised in their own little square foot of the playing field ..? At best, one has such armies with the classical mercenaries — and even they were, are, organised much more effectively. The military discipline of the multinational überbureaucracies will fail in the murk out there, certainly when one’s not against one specific opponent, as above.
‘Normal’ teams in sports are, ballpark, smaller than 20 players, all maybe having designated tasks but always all (of the winning teams) have the flexibility to step out of their role and position, with team mates catching the blind spots. As if that ever happens in business-outside-the-startup-scene. The closest to actual normal business, would be athletics teams, all with their specialties, contributing to the total, the satisfaction of having succeeded as a team winning out over the satisfaction of personal performance over team gains.

So, what was that about through (‘high school’/university age) (team) sports, would one breed character for the real world ..? If one does sports, obviously it should‘nt be for that reason but for the joy of it. ‘Character building’ as an argument shows one has no clue.

2 thoughts on “You sporting against all”