Just a warning; the world altogether is moving into the danger zone now. Not qua global warming, the threshold on that has been passed already … Not on plastic soup, that’s approaching insurmountability-before-collapse (in this style).
But of a more encompassing style, as typical in the lack of real response to this: ‘Predictive’ profiling creeping (sic) on. As posted earlier, we may need to make haste with anti-profiling human rights, before it’s too late. Which is, quite soon.

Yes, the benign purpose is there. But is also, ridiculously superficial window dressing. The sinister effects, lurking in the background. With all data about abuse – my guesstimate: everywhere such systems are deployed – suppressed. With the moronic claim that yes sometimes, the Good (false positives) will have to suffer from the Bad; if you think that, please remove yourself from the gene pool. Certainly since the false negatives figure nowhere. Anyone surprised we never hear of the false positives ..? Nor of the right positives; do they exist or are they enrolled in the management talent pool since they seem to know what’s up ..?

And, what negative societal effects of total surveillance ..? Already, our society is much tighter controlled than any <give or take a century ago>’s totalitarian regimes, so vilified, could. We’re living in the tirant’s dream world. And, as researched, the effect is we complain all the less. 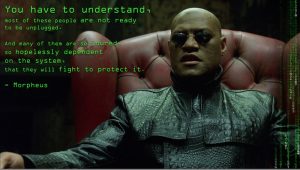